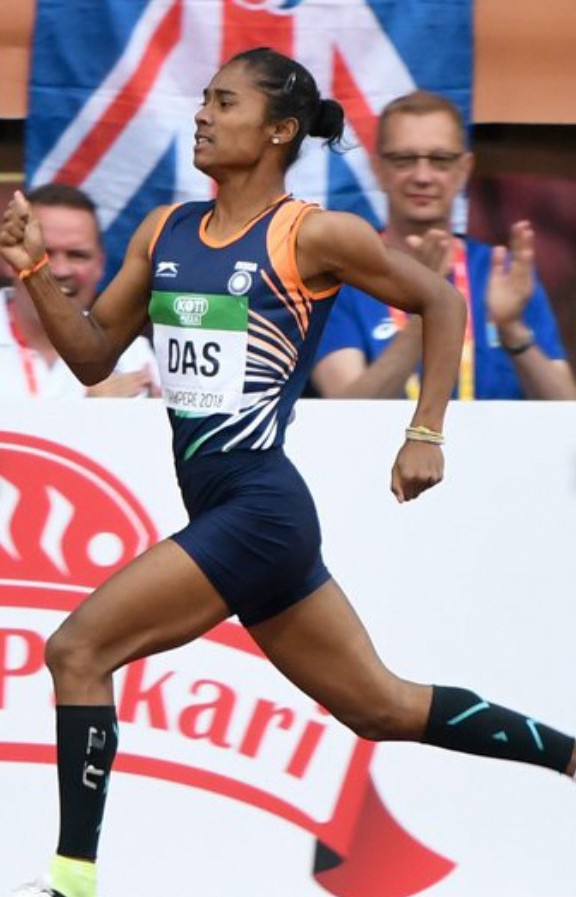 Hima Das is also referred to as ‘Dhing Express’. She is the youngest daughter of Jonali and Ranjit Das. She has four more siblings. In the year 2018, she was appointed by the government of Assam as Asssam’s Brand Ambassador for sports. It is said that she has wings in her soles. A pair of spikes was worn by her just a few years back. Before that she did not have any sporting gear which was required for her races.
Her first interest was football and she wanted to become a footballer. She used to play for local clubs as a striker. Her PE coach advised her to try individual sports in the year 2016. She is the girl who chases time. History was created by her in the year 2018 when she won the gold medal in the women’s 400m event at the IAAF World U20 Championships held in Finland.
It is an inspiring story that her father brought a local pair of shoes during her first nationals and Hima Das wrote ‘Adidas’ on them. But after she created history by winning a gold medal in Finland in the women’s 400m event at the IAAF World U20 Championships, Adidas made her the brand ambassador. Adidas also makes customised shoes for her.
She is an exemplar and epitome of hard work and success. She won 5 gold medals for India in the year 2019 in July. She won 5 gold medals at Poznan Athletics Grand Prix (Poland), Kutno Athletics Meet (Poland), Kladno Athletics Meet (Czech Republic), Tabor Athletic Meet (Czech Republic), Mezinarodni Athleticky Mitink (Czech Republic). In 2018, she was awarded the Arjuna Award by the President of India. She was also appointed as India’s youth ambassador of UNICEF-India.