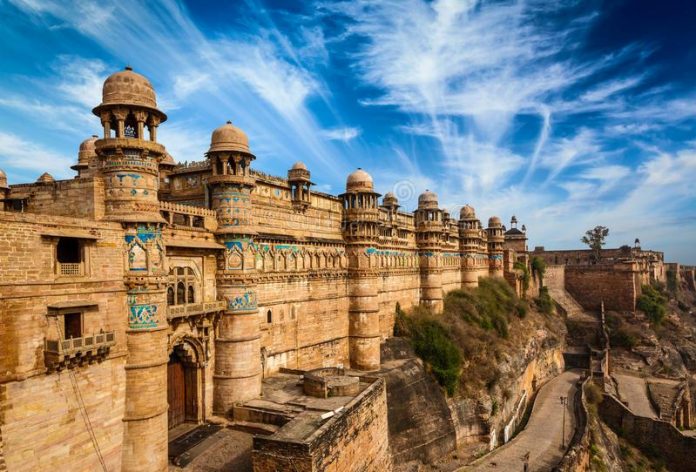 Central India, Land of the Vindhya hills and its elevations commands strategic advantage over the surrounding plains. It is the perfect place to build fortifications. On one such rocky outcrop is the great fort of Gwalior. It is stretched across the long and narrow hill. Gwalior has witnessed the rise and fall of Kings and conquerors, ancient Hindu dynasties, Turks, Afghans, Mughals, Marathas and the British. No other fort in India has seen more rulers. The Marathas Scindia dynasty took over in the late 18th century. Under them the Gwalior state extended 60,000 square kilometers. They held the fort of British protectorate until Indian independence.
The fort’s origin is unclear. Only myth and legend survive. The recorded history of Gwalior fort goes back 1,300 years. Among its early constructions are 7th to 15th century Jain cave temples. A colossal 58 foot idol of Rishabhanatha, the first Jain tirthankara is amongst the many rock sculptures.
Gwalior fort is an architectural marvel. It stretches almost two and a half kilometers long. The average width is just under one kilometre. Gwalior fort is also one of India’s most grandeur majestically built historical buildings. Mughal emperor Babur called it the Pearl in the necklace of the forts of India. The fort’s splendour owes much to the palaces within such as Man mandir, which is famous for its intricate tile work. It was built in 1486 by one of Gwalior’s greatest rulers, Tomar Rajput Raja Man Singh. But with the invasions of Turks, Afghans and then the Mughals, the fort acquired a sinister dimension.
The story of Man Mandir is a story of contrasts. From the outside it is so beautiful, but from the inside, it’s dingy, dark and gloomy. Its dim interiors held dark secrets. Hidden passageways descended into hell, a political prison. Many potential threats to the Mughal throne were sent to the dungeons of Gwalior fort. Close relatives, even brothers of the ruling Mughal were sent to these hell holes. Absolute power demanded absolute ruthlessness. A prisoner’s fate in the medieval times was bleak. The conditions were horrific. There was a little chance of escape. Time would stretch in a medieval jail. Devious means were employed to knock contenders out of the succession race like opium was forcefully feeded daily. To eliminate the contenders without killing, they were mercilessly blinded with sharp objects. Under the Mughals, the elegant halls under the Man mandir were converted into terrifying torture chambers. Within the walls of Gwalior fort is finest architecture and magnificent carvings. But hidden from admiring eyes, there were horrors.