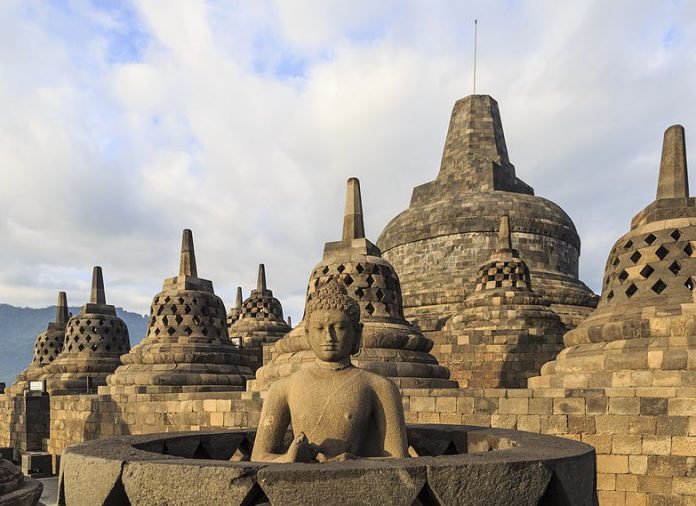 The magnificent Borobudur temple is located on the island of Java, Indonesia. It is the world’s largest Buddhist monument. It is an ancient site which is widely considered to be one of the world’s seven wonders. The temple is situated majestically on a hilltop, with a beautiful view of lush green fields and alpine hills. It was constructed in the 9th century during the reign of the Sailendra dynasty. India’s influence can be seen in the temple’s design in Gupta architecture but there are several elements which make the temple uniquely Indonesian. The temple comprises nine stacked platforms, three circular and six square, topped by a central dome.
It covers an expansive area, measuring 123 x 123 meters. The monument is a wonder of design, decorated with 2,672 relief panels and 504 Buddha statues. The stonework of this temple is phenomenal. Surprisingly the temple was built without the use of any cement. It is still as strong as it was in the 9th century. In 1815, it was rediscovered as it was buried under volcanic ash. UNESCO and the Indonesian government worked together in the 1970’s to restore this majestic temple to its original serenity. It took 8 years for the restoration work to complete. The stone carvings represent depictions from the life of Buddha.
The temple is just a one hour drive from Yogyakarta. One can easily go there by renting a car. The best way to explore the historical temple is on foot. You can also rent guides which are easily available there and they will enhance your experience by enlightening you with the history of this temple. You can also chart a cart at affordable prices. It is a remarkable example of traditional Indonesian architecture.